Getting into the latter half of season one, this is where I’m starting to get farther out of my comfort zone. I don’t typically do baked goods, doughs, pastries, etc. and Alton sprinkles a lot of them throughout the series. That’s good though, it’s one of the reasons I’m doing this in the first place!

Today was Southern Biscuits from the episode “The Dough Also Rises”.

But with a small twist. The other night at dinner, Gemma and I were talking about this project and given that she prefers to eat gluten-free, she asked if I could try some of these recipes GF. So, for these biscuits I made two half-batches: one with regular AP flour, and the other with gluten free replacement flour. 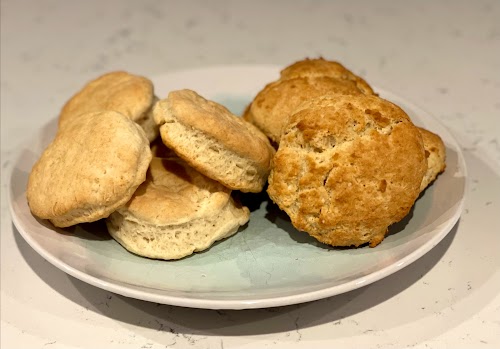 On the left: with gluten, on the right: gluten free. Not pictured: the one Vivian immediately stole and scarfed down.

The GF version was just as good as the gluten version, though the dough was a HUGE pain to work with. It never really formed into a workable dough, but I guess that makes sense because gluten is what makes doughs, um, doughy.