What have I been doing for the last month? Looking for catfish. Seems like it’s really tough to get here in New England in the summer. See, I have two recipes to go in Season 3 and I wanted to do the Catfish au Lait before the duck, so we can end the season with a little flair.

Anyway, after striking out on finding catfish locally – which is odd given the large amount of fishmongers here on the coast – I finally bit the bullet and had some shipped overnight to my house, to the tune of about $100. Was not thrilled about that, but, progress must be made!

To tell you the truth, I was not excited about this at all. I’ve eaten catfish before and thought it was kinda blech. But I vowed to keep an open mind, and I went ahead creating the poaching liquid and preparing my fillets. The recipe calls for using an electric skillet, but directly after finishing and serving the onion soup I gave it away. So instead, I brought the liquid to a bare simmer, popped on the cover, and turned off the heat for 9 minutes. 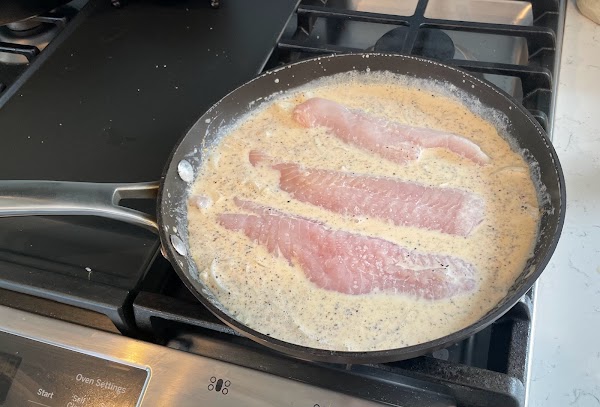 After nine minutes I opened the cover and tested the liquid temperature out of curiosity. It was still in the mid-140’s so not bad. Since I was doing this during lunch (so as not to risk ruining an entire dinner if it went poorly), we just put the fish out on the cutting board and went at it with a couple forks.

The fish was… fine. I mean, not terrible but also not amazing either. I don’t think I would really take the trouble to source catfish and do this again, that’s for sure. But at the same time we don’t regret eating it. Maybe my opinion is a little colored by the hoops I needed to jump through.

My goal of not leaving recipes that I’m not excited for to the end did not quite play out the way I’d hoped. One more to go in the season, though, and I have the duck on order already…